From strength to strength: How volunteer David Toovey’s hardships led him to a new life calling

He was a breech baby and came into the world with Spina Bifida Occulta.

But David didn’t know he had spinal deformities until he experienced back pain as an adult.

He had seizures as a baby and trouble with his coordination and balance as he grew – but his mum didn’t know the cause until much later.

Growing up and finding a calling

David grew up in a loving family home, in a public housing block in Daceyville. His spinal differences didn’t stop him swimming, going on camping trips, and playing cricket and golf. But he found it awkward to run. When he left school he looked for work in office management or computing, and had several knock-backs due to his lack of experience.

“That was when I decided to try my hand at volunteer work as a way of entering the workforce,” David says.

It paid off. He became a volunteer at the Australian Music Centre in Ultimo, cataloguing music. Within three months, he landed his first full-time paid job as a Computer Operator with a consultants’ firm.

He went on to work in the freight transportation and rail industry, as well as in operations support at Pacific National in Parramatta.

“This was very tiring as I had to work 12-hour rotating shifts,” David says. The ups and downs of adulthood

After learning about his spinal problems, David had to accept there were things he couldn’t do, including heavy lifting and sports.

He also had to undergo a lot of physical therapy.

“Even though I’m restricted in my movements, I’ve always been thankful for what I have. I’ve been lucky to have lived a normal life,” David says.

However, things took a turn for the worse for him in 2019.

“It was a particularly disastrous year for me and one I’ll never forget,” David recalls.

“In 2018 I lost my job at Pacific National due to staff cuts. I found it difficult to get another full- time job, even after numerous job applications. I was living off my savings, but in March 2019 my bank balance was running low. So I applied for Newstart with Centrelink.”

Around the same time, David was having problems with his landlord. “It was an unpleasant experience living there, and in April that year the property went up for sale. I was given six weeks to vacate as they needed to do renovations.”

A few weeks after this news, David’s mother had a stroke and was rushed to hospital.

“I visited my mother every single day in hospital until she passed away two weeks later,” David recalls.

“It was the saddest moment of my life.”

In the middle of his grief, David found himself without a home.

All the items from their house were moved to the garage so renovations could start. He was reassured his items would be kept safe.

“I ended up sneaking into the garage to sleep at night as I had nowhere else to go. I also turned to charity organisations for food and other essentials. After spending several nights in the garage, I went to the Newtown Community Centre to see a welfare officer who referred me to emergency accommodation in Surry Hills. 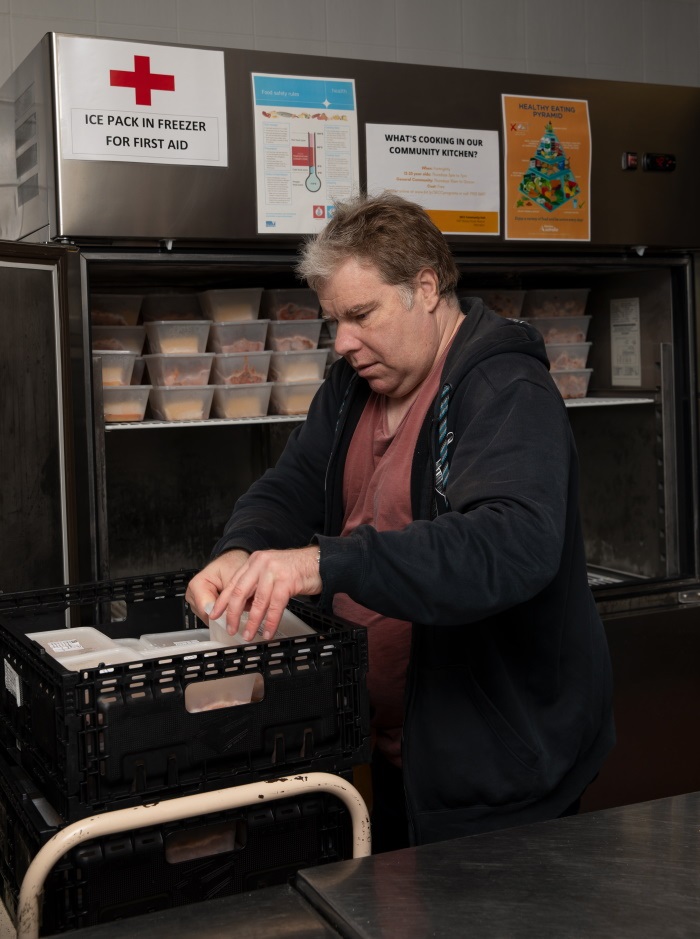 “At the time, I felt embarrassed, I didn’t want to tell anyone about what was happening to me, especially family or friends.”

After spending a few months in emergency accommodation, David went back to the garage to pick up a few of his belongings. But many things had been thrown out, including his mothers personal effects and a box of important documents.

“It was a heart-breaking moment for me. After that, I decided to donate most of my possessions to charity,” David says.

He made the most of his time in emergency accommodation by taking part in Outreach with the Salvation Army. This involved delivering food to the homeless.

“It was certainly an eye opener, seeing so many people living on the streets,” he says.

After about seven months in emergency accommodation, David was moved to hotel accommodation due to COVID-19, and he stayed there for 10 months before being accepted into public housing.

The challenges David has faced have changed his perspective on life.

“One moment you can be living comfortably, then everything comes crashing down on you in the blink of an eye.”

David realised he needed to make adjustments to his lifestyle.

“I found it easy to adapt as I’m not a materialistic person,” he says. “I prefer to lead a simple life. I have all that I need in life. For that, I am grateful.”

“Whatever goes wrong, there’s always someone worse off than us. There are so many people out there doing it tough.

“I’d like to think I can help to make a difference in their lives. This is what motivates me and keeps me going.

“It’s taken a while for me to pick up the pieces but I’m now starting to make plans for myself and am looking forward to a productive life ahead of me.”

David took long walks and caught up on his reading during Sydney’s enforced lockdown. He also watched the Olympic Games and the Paralympics on TV.

“Paralympic athletes are an amazing group of people,” David says.

“It’s incredible how committed and dedicated they are. They’ve overcome so many obstacles to follow their hopes and dreams. It didn’t matter whether they won or lost. They were happy knowing they were able to compete. This is something we can all learn from.”

When David lost his job at Pacific National, it was continually tough to find another opportunity. So he went to a volunteer information session with the NSW Volunteer Centre at The Rocks.

“A few days later, I was given some info about volunteering with South Eastern Community Connect (SECC) at Eastlakes.”

David met with Volunteer Manager Sue Ohanian and talked about finding the right fit for his skill-set.

He began as a volunteer with the Food Services team in the Eastlakes office, and later added a role with The People’s Pantry in Mascot, which offers food relief to locals experiencing hardship.

David knows what it’s like to be in a tough patch, so he relates to clients with empathy and compassion.

“It’s always a good feeling to help someone and see them walk away with a smile on their face.” He recalls the time he served a new client at the pantry who burst into tears when handed a food package.

“She was so relieved and full of joy. It’s a moment I’ll never forget”, he says.

“Working as a volunteer has helped me to turn my life around. I feel like I’m a valued member of the community when I volunteer. It has given me a real sense of purpose in life.”

And in 2021, David was awarded the Maisie Foster Volunteer of the Year by SECC.

David’s tireless work, especially with The People’s Pantry, has meant food security for far more people in our community

David says his mental health has improved greatly since working with SECC.

“It has helped me rebuild my confidence, which was at an all-time low a few years ago.

“I’ve also met some wonderful people while working at SECC. The team members are helpful and encouraging. It’s just like a family at SECC and I will always value the friendships there.”

To those considering volunteering, David says to “go for it”.

“You’ll never regret it. There are so many benefits to volunteering. It gives you a sense of belonging and gives you the chance to meet new people and make friends. Try it out. I’m sure you’ll find ít a rewarding experience, just as I have.”

Enquire about volunteering with SECC now, or find out more.